I’ve grown up having headaches for most of my life. Recently, it was suggested that I may have a gluten intolerance, which may lead to headaches. Willing to try pretty much anything to get rid of them, I decided to give up gluten for a month, starting on October 1st, to see if there was any merit to this claim. By “give up gluten,” I don’t mean that anything that might have a smidge of gluten was off-limits—I may have intolerance, not an allergy. I’m basically just staying away from breads, pastas, cereals, and most baked goods (which can be a challenge in our birthday treat-filled office).

Honestly, the past week has not been too hard. I had one slip up that was due to my forgetfulness, not because there weren’t other options available. But I’ve been mostly trying to eat whole foods rather than a bunch of normally gluten-filled substitutes. However, this past weekend was my mom’s birthday dinner, and she requested homemade spaghetti and meatballs. Since I didn’t want to miss out on the deliciousness myself, I decided to try some gluten free spaghetti noodles (just for me—I let the others have the regular kind since I wasn’t sure how these were going to turn out). And then some new gluten free products came across my desk. Schar has several gluten free options, including spaghetti and penne noodles, so I decided to give them a shot.

I’ve tried brown rice noodles before, and never was too happy with them. I wanted hearty spaghetti noodles that would hold up well under tomato sauce and meatballs. These noodles were hands down the best gluten free noodles I’ve had. They said to boil for 11 minutes, and I was a little worried since I got distracted and wasn’t keeping track of the time, but I did a noodle test to check the doneness, and they were perfect! Brown rice noodles tend to stick together a lot and turn mushy—these did neither. I drained them and added a little olive oil to them, and even yesterday they held up for some leftovers! I was impressed! 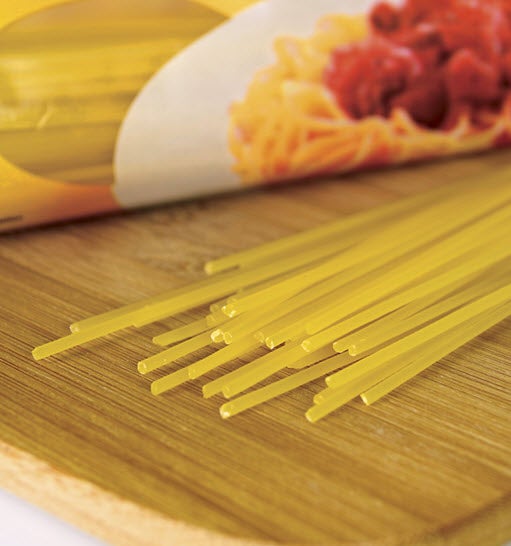 So far this week, this is the only “gluten free” alternative/substitute type product I’ve really tried, but I’ll keep you posted on others if the opportunity comes up!

Do you have any favorite gluten free products that you like better than others? Have you had better luck than I have with brown rice pasta?