Canola oil is not the healthy cooking and salad oil it’s made out to be, despite all the wonderful marketing touting it as the healthiest option out there. But before we get to why, let’s first get to know canola oil and the seeds it comes from.

Canola oil is a processed oil derived from rapeseed. Back in the 1970s, Canadian scientists at the University of Manitoba used natural breeding methods to create a new kind of rapeseed in an effort to reduce the plant’s naturally occurring glucosinolates and erucic acid. This hybrid rapeseed is used to produce what we now know and consume as canola oil.

Canola oil is was given its name by the board of the Rapeseed Association of Canada (“Can” for Canada and “ola” for oil) in part to get away from the negative connotations of rapeseed.

From Rapeseed to Canola Oil

To turn the hybrid rapeseed into canola oil (also known as also known as “low erucic acid rapeseed (LEAR)” or “Canadian oil, low acid”), manufacturers first slightly heat the seeds, then crush them in order to press out the oil.

So far so good, right? If the process ended here, we’d be good.

Unfortunately, there’s more to making canola oil than a little heat and pressure.

Almost all canola oil you find in the store is refined using hexane, a chemical constituent of gasoline that is also widely used as “relatively safe” solvents.

If that wasn’t enough to give you pause, the final step in the canola oil production process involves bleaching and deodorizing using high-heat steam.

The problem is the natural omega-3s cannot stand up to the heat, and they become rancid and foul-smelling. The need to deodorize the oil to make it palatable for human consumption causes those omega-3s to transform into trans fats.

While canola oil is stamped with the GRAS (“generally recognized as safe”) sign of approval, the production process that strips out most of the beneficial fats from the seed and uses “relatively safe” chemical solvents sounds anything but safe.

Knowing how canola oil is produced must, at the very least, call into question the claim producers make about it being the healthiest of all cooking oils. 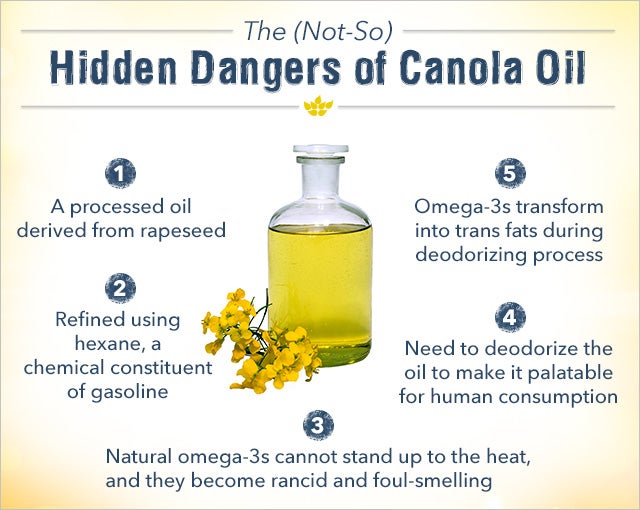 What Happens When You Cook with Canola?

The hype around canola oil is mostly focused on the now debunked idea that saturated fats are horrible for your health. As a processed, low saturated fat oil, canola was the magical answer for those trying to maintain a low fat diet.

One of the main problems with consuming canola oil and other heated, processed oils is that it can disrupt your omega-3 to omega-6 ratio, which ideally sits around 1:1.

Contrary to what manufacturers would have you believe, canola oil is not a great source of healthy omega-3s. And when you heat it during food preparation, many of any remaining omega-3s in the oil will be damaged.

As a result, you will be unknowingly and unintentionally introducing oxidized cholesterol and trans fats into your diet.

You also find canola oil in a lot of processed foods you buy off the shelf at the supermarket.

The issue there is that food manufacturers use hydrogenated canola oil to achieve the longest shelf life possible. It’s great to stock a pantry full of foods that won’t spoil for months or even years, but the trade-off is having to consume all those trans fats.

The best option is throwing out your canola oil and replacing it with organic coconut oil, which may in fact be the healthiest cooking oil option, as it’s produced by Mother Nature herself. Unlike canola oil, coconut oil can withstand heat during cooking without breaking down or oxidizing into unhealthy trans fats. Plus, coconut oil can be used for a bunch of other amazing things throughout your home. Check it out.

So, what’s your go-to cooking oil? Do you use canola, and if so, will you be making the switch?

Beyond coconut oil, there are quite a few other healthy oils beyond vegetable or canola oil. Read our guide to healthy cooking oils and check out our infographic below.