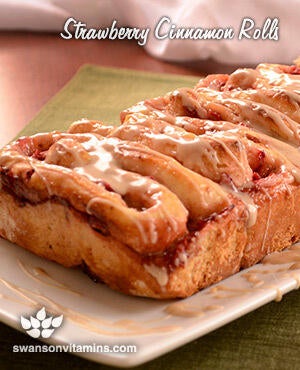 Strawberry Cinnamon Rolls
by Swanson Health
F
Low Fat
S
Low Sodium
Vg
Vegetarian
No weekend brunch would be complete without the warm, gooey flavors of the classic cinnamon roll. We've taken it up a notch by adding strawberries to this already-delightful treat! With less than 300 calories and an impressive 5 grams of fiber per roll, they by far surpass the nutritional makeup of a traditional cinnamon roll. Plus, they're fun to make with the family and only take about 90 minutes from start to finish. You can switch things up with the berries and jam in this recipe—try rhubarb, apples or raspberries! There are so many possibilities, each of which is bound to wow your taste buds!
Time: 0 hour
Serves: 0
Serving size:
Ingredients:
Instructions:
1. In a small saucepan, heat milk until warm. Mix in the butter until melted. Remove from heat and let cool to lukewarm. 2. In a large bowl, combine 2 ¼ cup flour, yeast, sugar and salt. Stir in egg and water and mix well. Slowly add warm milk/butter mixture until dough forms. Stir in remaining flour. 3. Flip onto a lightly floured surface and knead until smooth. 4. Move the dough back to the bowl, cover with a damp towel, and let sit for 10 minutes. 5. Roll out dough into a roughly 15x10 inch rectangle. Spread the strawberry jam evenly over the dough, then sprinkle with cinnamon. Evenly cover the dough with sliced strawberries. 6. Roll the dough and pinch the seam to seal. Cut into 12 equal rolls. Place rolls cut side up in a greased 11x13 baking dish. Cover and let rise until doubled, roughly 30 minutes. 7. While waiting, preheat oven to 375° F. Bake until golden brown, roughly 30 minutes. 8. For the glaze, mix the powdered sugar and cinnamon with 1 tablespoon of milk. Stir until glaze forms. Add more milk to achieve desired consistency. Drizzle glaze over finished rolls and serve.
Nutrition facts (per serving):