It’s time to stop shaming ourselves over sodium. We’ve been taught a lie over the past several decades—a lie that began with good intentions—that salt is bad for us. The truth is, the wrong salt is bad for us, but the right salt, the naturally produced salt given to us by Mother Earth, feeds and energizes our bodies. This healthy salt delivers crucial minerals our bodies need to function at its best. And that’s the truth. And that’s why it’s time to set the record straight on salt...

In contrast to water, salt has a cubic structure. What makes salt special, however, is its mutability, its ability to transform. Salt is the only crystal that dissolves in water. If we place a rock crystal in water, it will retain its structure. If we put a salt crystal in a glass of water, it dissolves. The ensuing product, called sole [so-lay], is neither salt nor water, but something entirely new. If we let the sole evaporate, we get salt again. This mutability is the reason why salt, in contrast to carbohydrates, protein or fat, does not have to be metabolized by our bodies. Salt is always present in its ionized, as opposed to its molecular, form.

The Functions of Salt

The special properties of salt enable it to take over vital functions in our bodies. Osmosis, the basis of cell metabolism, is regulated exclusively by the concentration of salt in the cells. Salt plays a role in all our bodily activities. Every thought, every movement, all our actions are steered by our brains and the central nervous system—and the nerve fibers can only transmit impulses when elements contained in salt such as potassium and sodium are present.

Today’s common table salt has nothing in common with natural salt, formed over millions of years. In fact, table salt isn’t even natural at all. It’s a chemical concoction made with about 98% sodium chloride and a 2% mixture of random chemicals like moisture absorbents and iodine... a far cry from anything one would consider natural.

You will now of course be wondering why we chemically “clean” valuable natural salt and reduce it to lesser-value sodium chloride. The answer is very simple: approximately 93 percent of the world’s salt production is used for industrial purposes, for which sodium chloride is required in its pure form. About 6 percent finds its way into the food industry as a preserving agent, and only a tiny percentage reaches our kitchens as branded salt, table salt or cooking salt. As if this were not enough, the natural salt is not only depleted of the minerals and trace elements so vital for us, but has preservatives and other chemicals added to make it nice and white and to make it easier to sprinkle or pour. Mechanical mining methods and chemical processing damage the crystalline structure of the salt. It is natural salt, with all its elements, that our bodies need in order to function as they should. In fact, we only require the minute quantity of under 0.035 ounces of salt a day. Most of us are not aware, however, that the average daily per capita consumption of common salt lies between 0.42 and 0.7 ounces—due to the large quantities of sodium chloride “hidden” in prepared products. As our kidneys are only capable of eliminating 0.175 to 0.245 ounces per day, our excretory organs are permanently overburdened.

What about Sea Salt or Rock Salt?

If you think about all the pollution and toxic contaminants that have been dumped into our oceans over the past decades, you’ll easily understand why sea salt is no longer a healthy option. Rock salt, a seemingly better choice, is still nutritionally deficient...

The earth has plentiful resources of salt, not only in the oceans, but also in the form of rock. In contrast to sea salt, the salt in rock, hidden in the belly of the earth, was protected to a large extent from environmental influences. The salt found in mines is mostly rock salt, the proportion depending on geographical location. From a biochemical perspective, rock salt is more valuable than cooking salt, because it is a wholesome, natural substance. Although rock salt contains all the elements also present in the primeval oceans from which it emerged, these elements are present in molecular form and can therefore not be absorbed into the body’s cells. Only minerals integrated into the lattice structure of the salt, i.e., that are present in ionized form, can enter human cells and thus be available to the body.

The decisive factor in the formation of pure, natural crystal salt is the pressure to which the salt was subjected for millions of years. In contrast to rock salt, crystal salt not only exhibits a higher biochemical availability of its constituent elements, but, due to its geometrical structure, also exhibits a higher natural state of order that is the source of the biophysical properties. However, even in the case of crystal salt there can be much variation, depending on how clear, transparent, colorless and thus pure the crystals are. Not every lump of salt that appears to be crystalline satisfies the requisite quality criteria.

Crystal salts from the Himalayas are today considered to be the qualitatively highest grade salts because of the enormous pressure forces during their creation. 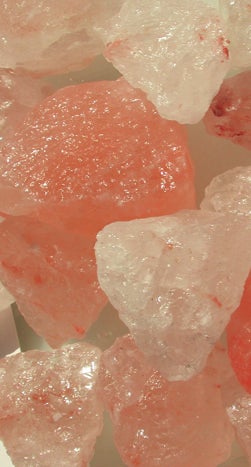 Why? Because rock salt didn’t form over hundreds of millions of years under great pressure, which, in the case of Himalayan Crystal Salt, locks in the salt’s inherent minerals and trace elements in colloidal form, making these important nutrients readily available to your body’s cells.

Himalayan Crystal Salt’s natural nutritional profile includes over 80 energizing minerals and important trace elements that your body needs for optimal function. It is the only healthy option for you and your family. It’s pure. It’s unrefined. And it’s the only salt that delivers life-giving, natural vibrational energy you can feel.

Question: Is Swanson Himalayan Crystal Salt tested for heavy metals? I'm specifically concerned about the arsenic levels in this salt.

Answer: Yes, it is. The spec sheet for our salt specifies the following...

The maximum daily dose must be based on the maximum daily dose on the product label. While there may be arsenic in it that might be higher compared to some other foods, it will be less than 10 mcg per max daily dose (¼ tsp). With that being said, arsenic is a chemical that exists in very trace amounts in most all of your food (as it is found in the soil), water, and even the air you breathe. The concern for getting too much arsenic from one single source is minimal, especially with the FDA limitations that would require a product too high in arsenic be pulled from the market. 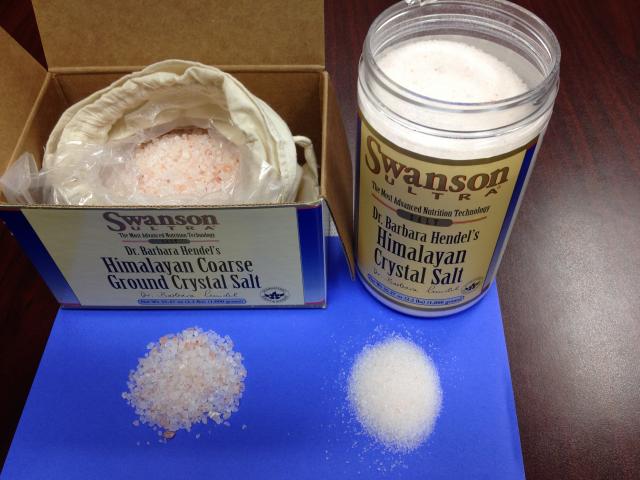 Question: I use both Himalayan and sea salt for their mineral content, but how do they compare with iodized salt for iodine content? If I'm not using iodized salt, do I also need to supplement iodine? I have gotten iodized sea salt but it is not always available.

Answer: Himalayan Crystal Salt doesn’t have any added iodine like the iodized salts do, so you would still want to ensure you are getting at least the RDA of iodine from other sources in your diet or with the help of iodine supplements.

Question: I switched from Celtic Sea Salt to Himalayan Crystal Salt when Swanson had an interview with Barbara Hendel and then had a huge sale on her salt. Last week, I happened across a comment that stated that Himalayan Sea Salt has aluminum in it. I'd appreciate any info regarding this.

Answer: Actually, ALL natural salts, including Celtic Salts and Sea Salts, will have some small trace amounts of aluminum as well as the scary things like lead and mercury… but it’s such a small trace amount that you’re likely to get more from any of the fresh fruits and vegetables out of your own garden. The unfortunate fact of nature is that all of those trace minerals exist in very trace amounts in all of the soil and all of the water in the world. The very fortunate fact is that your body has filtering organs like the liver and kidneys to remove toxins and other things you don’t want in your body.

Question: Where can you buy Himalayan Crystal Salt?

Answer: There are a lot of stores that sell Himalayan Salt online. Naturally, we recommend you shop with us. We have guaranteed low prices, the highest quality crystal salt, and amazing customer service. You can buy Himalayan Crystal Salt here.