I’d like to take the opportunity to talk to you about the Marketplace Fairness Act, which the United States Senate recently passed with far too large a margin for comfort. We here at Swanson Health Products oppose this bill, and I’ll explain why. I want to make clear to you how this bill would impact your access to affordable vitamins, supplements and thousands of other natural health food products and drive up prices 7-10%.

How? The answer is quickly revealed when we examine who is really behind the Marketplace Fairness Act...

"... it is supported by big business retailers who view the expansion as an opportunity to undercut their smaller online competitors. For years, big business retailers like Wal-Mart have been lobbying in favor of expanding the online sales tax as a way to increase costs faced by smaller competitors, and amazon.com, a company that originally opposed marketplace fairness legislation, has recently joined Wal-Mart in support of the “Marketplace Fairness Act.'As the Washington Examiner’s Timothy Carney describes this situation, “big business is lobbying for bigger government, which would hurt Mom and Pop.'" freedomworks.org

Click here to write to your congressmen now.
Tell them you oppose The Marketplace Fairness Act.

The Marketplace Fairness Act would essentially force online retailers like SwansonVitamins.com to become tax collectors on behalf of every single state. Proponents of the bill argue that current tax laws have created an unfair advantage for online retailers, as they are only forced to collect sales taxes in states where they have a physical presence. We believe the bill, as written, would in essence raise taxes on consumers and impose massive burdens on small, locally-owned online retailers that will only further drive up prices.

As a company with both an online store and a traditional brick-and-mortar store here in our hometown of Fargo, ND, Swanson Health Products is in the unique position of clearly understanding this issue from both perspectives... and as such, we are able to offer perhaps the best insight into how you, the consumer, will ultimately be affected if this bill passes.

After carefully reading and considering our position, I hope you take the time to contact your elected officials in the House of Representatives to voice your opinion about H.R. 684: Marketplace Fairness Act of 2013. 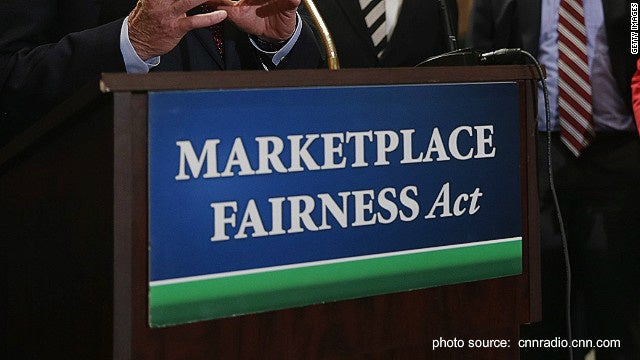 This is the most basic result of this piece of legislation: the prices you’ve come to rely on at SwansonVitamins.com could go up perhaps as much as 7-10% to offset the significantly high costs of complying with the over 9,000 state and local tax laws from around the country that would all need to be carefully followed. In the natural health industry specifically, an already heavily regulated company like SHP will experience a swift and difficult increase in operational costs just to remain in business.

The logistical and financial burdens this law will place on companies dedicated to delivering high quality at a low cost should not be underestimated. The Marketplace Fairness Act would ultimately result in higher prices and may even lead to reduced availability of certain products due to local laws and statutes that would suddenly come into play for online purchases. Instead of focusing on improving our products and delivering great customer service, we will be forced to divert our resources to complying with these new burdens.

I am not a big fan of alarmist rhetoric, which is why I rarely speak out so strongly on matters other than health and wellness. I am not a political pundit. I am however passionate about delivering the health products you need at prices you can afford, and I am seriously concerned about our ability to keep prices down should this bill be approved by the House of Representatives without significant modification.

2) Small, Locally-Owned Businesses Will Get Hurt

At our core, Swanson Health Products will forever be a small business. My father started SHP back in 1969 out of our garage in Fargo, ND. He worked tirelessly to grow the business in all of the right ways. He stayed true to his roots, and we’ve continued that legacy. We’ve never left Fargo; it is our home. We are active participants and patrons of our community, and we believe in keeping it local. Taking on the massive responsibility of paying in to the more than 9,000 other state and local jurisdictions, each with their own set of rules and conditions, would divert a large amount of our resources and dilute the positive impact we strive to make in our home state and local communities. We’ve chosen to stay local, to support the community that has supported us, and we believe that is the right way to operate.

Imagine the resources it will take to communicate, comprehend and comply with over 9,000 different sets of tax laws that are found through the United States. Imagine the costs associated with maintaining strict compliance... and the costs of litigation that would result should a small, locally-owned business miss a step.

If H.R. 684: The Marketplace Fairness Act were to become law, I have no doubt you will see the demise of many small businesses who simply cannot afford to keep up, regardless of how much they increase their prices. This is why giants like Amazon.com are in favor of this bill because they know as well it will be hard for their smaller competitors to remain in business.

3) The Playing Field is Already Level

The Marketplace Fairness Act has honorable intentions in that it seeks to level the playing field, but new research is showing that the playing field is much more level than some would have you believe. Brick-and-mortar retailers argue that they’re becoming nothing more than showrooms (hence the term “showrooming”) for customer to come in, view an item and then go purchase it online. A recent report from PwC (PricewaterhouseCoopers) shows this to be a myth:

The physical store remains the centerpiece of the purchase journey for many shoppers. In nine out of the 11 product categories in our survey, in fact, the majority of consumers use physical stores for both researching and purchasing. In addition, over the next 12 months, [survey respondents] expect to shop in-store far more than they expect to [shop] online... and 23% of our respondents research consumer electronics online and then go to a store to buy the product, compared to only 2% who do it the other way around.

Proponents of H.R. 684 also claim it would level the playing field for state and local governments who are missing out on this lost tax revenue. Politics aside, I don’t believe adding taxes to online purchases is the right answer to local and state fiscal issues. Just as I believe a higher price tag on a particular vitamin or supplement is not automatically indicative of its quality or superiority, I believe throwing more money at bureaucracy doesn’t always lead to improved governing.

In short, yes. This tax bill will have to be enforced and regulated, and the only way to do so effectively is allowing the creation of nationwide database of consumers.

Such a database is needed to handle the compliance side of the proposed law... to monitor and track where consumers live, what they buy and how much it costs in order to collect the proper taxes and remit them to the proper states, counties and cities (the 9,000 jurisdictions mentioned earlier). I fear such a database may become a prime target for hackers and identity thieves.

In the end, I share the concern of others who worry this bill will set a dangerous precedent that would allow states to tax business and other entities who have no presence—and therefore no representation—in their state. It is especially alarming for businesses that operate in states that have democratically voted and decided to be sales tax free. Common sense would tell you that state laws should only apply within the state’s borders, and this bill would do away with that logic.

I’m asking for your help. The bill only has one more hurdle left to clear, and that is with the United States House of Representatives. I urge you to contact your Representatives and communicate your concerns as soon as possible.

As always, I wish you the very best of health,